Before the Moon Ceremony

The problem with book extracts is that even short pieces of writing need a beginning - middle - end structure, and an extract is usually part of just one of those. An extract gives you a sense of style, genre, and content (possibly) but leaves you wondering what the story is. Why are these people here? Why are they doing that? Who cares? So to make it more interesting, I will reveal that this extract, from the second adventure of my wife Caroline, entitled Shameless Exposure , is from the middle of the book. All you have to do is work out a beginning and an end which are satisfying to you. By all means let me know what you come up with... 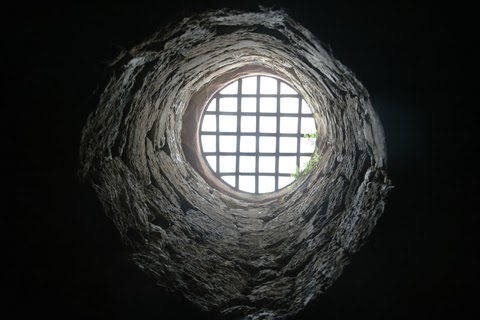 The tables were filled with smiling, chattering women. Nobody missed dinner this time, and not just because of the bottles of wine on the tables. Everyone was looking forward to the moon ceremony. For the majority, it would be their first attempt to make contact with an animal spirit. It would also be, except for the wayward Jocasta, their first physical release for at least twenty seven days, a release they had been skirting around with increasing difficulty in their daily practice.
The upper reaches of the legal profession were one of the few remaining areas of modern work life, apart from rubbish collection, which was still a predominately male environment. Robert was not used to being outnumbered so comprehensively and sat down next to Angus for moral support once he had collected his bowl of yellow lentil stew with yellow rice from the kitchen.
“Ye decided to stay then?” said Angus, taking off his cap and placing it on the table.
“Regina more or less insisted, but I am curious to see the ceremony.”
“Well I hope ye are feeling energetic. Ye may be in demand later on.”
“Not me, I’m married.” Robert picked at his lentils, his appetite not stimulated by the smell or the texture.
“There’s no one married on Mura. That’s what Miss Heart says, anyway. Ye best be prepared. Eat yer stew.”
“What about you? Are you married?”
“Nay. I’m still looking for the right girl. There’s not many single lasses on Sporran.” From his grizzled looks, Robert guessed Angus had been looking for a long time. Angus drained his cup of wine.
“Is that where you’re from?”
“Aye, lived there all my life.”
“What about the women who come to Castle Dunlaggin? Lots of them seem to be single and looking for something or someone.”
Angus leaned towards Robert and spoke conspiratorially. “Don’t get me wrong, I’m glad of the work ferrying people here and there and doing odd jobs for Miss Heart. But most of these lasses are wrong in the head. I wouldn’t want a girl of mine to get up to what they get up to.”
“But surely there’s nothing wrong with masturbation?”
“In front of strangers?”
“But it’s not just mindless sex, is it? They’re trying to connect with some bigger power, develop themselves spiritually.”
“You’ve no been taken in by this nonsense have you?”
“Not taken in I hope. I’m just trying to keep an open mind. It’s part of my training.” Robert immediately wished he hadn’t reminded Angus that he was a lawyer. Angus gave him a look of contempt and refilled both their cups with wine.
“Well don’t say I didn’t warn ye.” That was Angus’s final word on the matter, so Robert struck up a conversation with a stocky woman sitting on the other side of him. Linda was older than most of the other acolytes, in her forties he would guess. Robert noticed she hadn’t touched the wine in the cup in front of her. She said she was divorced and this was part of her project to get her life back together. She had decided to expose herself to as many new experiences as possible.
“What about you?” Linda said. “I’ve only been here two weeks but I gather it’s unusual for men to participate in the programme.”
“I’m not here for the programme,” said Robert. “I came to help Regina with a legal matter and ended up staying longer that I expected.”
“But I’m sure I saw you come out of one of the practice rooms with Georgina?”
“Yes well, it’s hard not to get drawn in if you spend a few days here. It does raise some questions.”
“Yes, it does,” said Linda. “More questions than answers. I’m hoping I’ll understand it all better after the ceremony.”

My books are available to download from Amazon. Start HERE
Posted by Unknown at 23:43