Tee-hee, it's me again, Antonia. Not exactly invited, but Robert won't mind. He's busy doing a website to promote some rubbish he says will be published. www.mywifecaroline.com

Robert is brilliant in court. I went to watch him once and he nearly made me cry. I felt so sorry for the plaintiff. But he's not so smart about passwords. He's used the same formula since the invention of the Internet. You just have to know which football team he supports and his clue, which I shouldn't tell you but has something to do with the goalkeeper. Robert's sulking because his team got knocked out of the FA Cup.


I really wanted the opportunity to tell you what happened in my bedroom when Caroline and I were preparing for our night out at the amateur strip competition in a busy bar in Allucano. Caroline was in two minds and needed some coaching. She'd never done anything like that before. Neither had I, really, but my pole dancing classes had given me the physical confidence that I could carry it off. I practised my gym routine with a couple of boyfriends who were kind enough to applaud enthusiastically.

Caroline had nothing suitable to wear. I never travel without a good range of shoes and underwear - you never know who's round the corner. But Caroline apparently hadn't even brought a swimsuit. She just had her usual business suits and tee-shirt and shorts for the outdoors. I said she could borrow a pair of glasses, put her hair up, and strip off her business suit, but she shuddered at the idea. No, she said, she didn't want to be herself. She wanted to be someone else instead.

'You need some unsuitable clothes to go with those unsuitable shoes,' I said. 'Then you'll feel right.'

So I helped Caroline go through my underwear, like it was an Anne Summers party. I chose her a diaphanous blue set because I knew they were the only ones that would actually fit her. I am quite slight. C thought it was a disadvantage that they had holes in crucial places, like the ones Robert had tried to make her buy from Agent Provocateur. I said, no, it's an advantage because you won't need to acually take them off.

'You mean we have to show our boobs and bottoms?' she said. 'I thought it was just a wet tee-shirt type of thing.' I said she would be fine, and took her through a short routine. She managed to stay upright, but she saw me frowning.
'What?' she said.
'There's hair sticking out,' I said. 'It looks silly.' C said she would dash back to her room and get the Bic out, but I insisted it would be better if she let me do it for her.

So there I am, on my knees, tongue stuck out in concentration, my head between C's legs, C naked on the bed, when who should walk in but our colleague, Jay Emm.

C was terribly embarrassed and felt she had to explain to Jay Emm why she was in my room. She even invited him to come along to the Spanish Knights bar with her. And that is how the four us, me with Clive, and C with Jay Emm, came to be in Sid's bar on that fateful night. 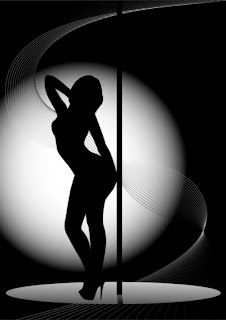