The cover of Shameless Exposure shows my wife Caroline on the beach, wearing the white bikini she bought in a shop not far from the Avenida Atlantica by Copacabana beach. She was visiting Brazil on a business trip with the Chief Executive of Monsaint Medical Instruments, an American called Andreas Rivera-Castillo. I never met him, but by all accounts he was a complex character, driven to succeed and frustrated when he couldn't get what he wanted.

Andreas had been head-hunted for the top job at Monsaint, parachuted in to clear up the mess left by the previous CE, Melody Bigger. He left his wife Trish behind in the States. He didn't talk much about her, but hinted that she had nervous anxiety and was better off at home. In London, Andreas hung out with a bunch of American ex-pats, bankers, diplomats, and other senior executives, enjoying the Premier League soccer and the London nightlife.

When Caroline was brought back from Frankfurt and given the lead role in expanding the company into South America she thought it was a reward for good behaviour and a sign that her career was still on an upward curve. Andreas dropped hints about succession planning and the possibility of a board position for her. Bringing her back to HQ would give him the opportunity to observe her work at first hand and to mentor her in the mysterious world of the very senior executive.

The day Caroline bought that bikini was a rare day off in a trip that had taken her to all the major South American capitals. She was glad to get away from Andreas for a while. He had engineered the business trip so that it was just the two of them, and tried every technique he knew to persuade Caroline into his room. At the risk of her career, she held out against him. The company risk assessment for the trip suggested Sao Paulo, the next meeting, was too dangerous, and brave Andreas said he would go alone, allowing Caroline a day on Copacabana beach.

After a little light shopping, she took a walk along the beach then settled down not far from a lifeguard station. A boy appeared taking photographs of women on the beach. She tried to wave him away, but he was persistent, and fifteen minutes later two big men appeared, one black, one white, with a photograph of Caroline and a demand that she pay a hundred dollars US for the picture. She refused. She had been warned against taking cash to the beach and didn't have any dollars anyway.

I won't spoil the book by telling you what happened next. 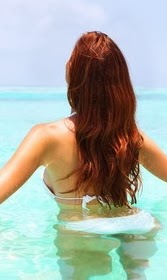 Shameless Exposure is an e-book available from Amazon. Just click on the title.
Posted by Unknown at 23:30