Caroline is back from kite surfing in California and wanted to tell me all about it. She said Cresta Wave, the woman running the course was amazing. She was a Scottish Duchess or a Dame who had given up her title to follow a spiritual path. Caroline said that Cresta reminded her of Regina, except that Regina wasn't a full-on lesbian. Cresta believed kite surfing was the perfect expression of freedom and a way to connect with The Big One.
"I know Regina was a deluded, power hungry egomaniac, but there was a kernel of truth in her animist beliefs. Especially the stuff about the orgasm. I think you should make it into another book, Robert."

"Did you connect with The Big One in California?" I asked, ignoring her suggestion. The last book had caused so much trouble.
"Not this time," said Caroline. "I had too many bruises." She lifted up the skirt of her dress to reveal centre-forward legs. "I loved it though. We all got really close, living in tents on the beach. I spent the whole week in a bikini. I will definitely do it again. I'm really brown, look." She hitched up the skirt again and pulled her knickers up over a butt cheek to demonstrate the contrast in skin tones. "How was your week?"

I said the Swanwick Writers' Summer School was very like kite surfing, only without the sea, surf, sunshine and women in bikinis. I said a woman called Alexa Radcliffe-Hart had taught me how to write a literary novel, at least in theory. Caroline's suggestion set me thinking.

"Are you serious?" I said, wondering if what C and I referred to as  The Scottish Affair between ourselves could be the basis for a ground-breaking literary novel. "Serious about publicising the events that led to you nearly losing your job and me being almost barred from the bar? You were dead set against it a week ago."

"I had a revelation," said Caroline. "When I finally achieved lift-off and was flying over the waves at fifty miles an hour wondering how to achieve a soft landing, I realised that life is short. I thought it might be very short indeed. I decided it was no good letting the Regina's of this world steal all the limelight. I want people to know." She looked at me hesitantly, almost shyly. "I want you to know, too."
"Know what?"

Caroline reached behind her and picked a notebook up off the kitchen table. She handed it to me.
"Before you read it, I need to explain something. Otherwise you'll get the wrong idea." I took the notebook. It had a hard cover and good quality paper. I opened it at random, and there was Caroline's loopy script in flowing felt-tip pen, different colours for different paragraphs, smudged here and there with drops of sea water.

"It started as a diary of the holiday," she said. "But then I started thinking about the spirit guides and Regina's orgatron regime. I know I was stupid to get sucked into it, but it did do something for me. You must have noticed." I had noticed; sex with my wife had been amazing since Scotland.
"So promise you won't hold it against me when you read how I went to the wrong address in Soho? I misheard what Xena said. It honestly was a genuine mistake."

I turned to the beginning of the notebook, intrigued, and wondering if the lady did protest too much. 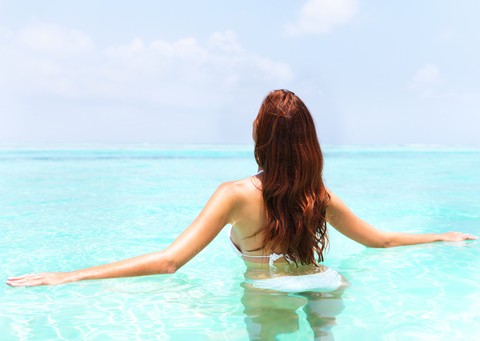