I know some married couples like to do everything together but Caroline says that she needs some space.She says it is a good thing if we develop our own interests, and she has accordingly booked a week in California entitled 'Introduction to Kite Surfing'. Her new friend Amber had told her about it. I said I quite fancied kite surfing but she said it was 'women only' because men show off all the time and I would have to find my own hobby.

I looked at all the activity holidays and summer schools available. There were hundreds, so I narrowed the search by adding 'blondes' and 'beer'. I discovered that Saltaire Brewery makes a five star blond beer. The Prague summer school programme came up trumps on both counts and I applied for 'Crime and Psychology', thinking I might be able to show off my legal training. It was fully booked.

So here I am at the Swanwick Writers Summer School in Derbyshire. The Romantic Novelists Association conference in Sheffield (see post 16th July) had introduced me to the wonderfully twisted minds of writers and, having blundered into their world through the inadvertent publication of Shameless Ambition, I realised I could learn a thing or two.

Swanwick Writers is an institution, 65 years in the making, the longest continuously running writers' summer school in the universe. It bears many of the features of an institution, and school is the right word. Classes run from dawn to dusk and some of the workshop leaders are not averse working participants' fingers to the bone and with old fashioned discipline: "I hope you're coming to the next session on Writing Literary Novels, Robert. I will notice if you're not there." Meals happen on the dot, and there is mashed potato in a silver pan that is served by the person at the top of the table. People are swooning with nostalgia and staggering under the weight of puddings.

Alison Chisholm's brilliant workshop, Writing Autobiography, was a great help. Those of you who know Caroline, Antonia, and the others already realise that my books are  thinly disguised memoir with some of the names changed. I learnt yet more things I shouldn't have done. I really should have run the draft past Von Wolfswinkle and then the legal problems might have been avoided.

The beer here is Mansfield Bitter from Bank's Brewery in Wolverhampton. A notable blond is Syd Moore, author of Witch Hunt and The Drowning Pool, and a champion of Essex girls. She read us extracts from her ghost themed novels last night and had everyone feeling totally spooked, especially when the lights went out. People say you should read your writing out loud to see if it works: well, that worked! Afterwards, people were recounting their ghostly experiences and as darkness descended over The Hayes Conference Centre, it seemed to turn into a medieval castle with Gothic features. I had to check under my bed. 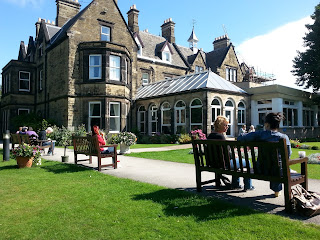