How did we meet?

Antonia has had her say. I was going to tell you what Sid Schweinsteiger did with his portfolio of pictures taken when Caroline and Clive got lost orienteering. But before I do, I must answer the question posed on my FB page: how did Caroline and I first meet?

How does anybody meet anybody these days? Fate. Fate made us sign up the same dating website. Fate made us both mention wigs in our profile. There were all the usual questions, age, weight, height, favourite film, favourite animal. But then there was a section designed to delve deeper and which was used to fine tune the short-list of possible dates. They came at this from a number of different angles like one thing about you that other people might find surprising and one thing you would do in private but not in public.

My one thing that other people might find surprising was that I sometimes wear a wig at work. I know its hard to believe, but in the higher courts the judges and barristers still wear a fancy wig like it's the eighteenth century.

Caroline's thing she would do in private but not in public was wear a wig. The dating computer picked up the wigs on our profiles and decided we were close enough, even though we were imcompatible in likes and dislikes.

The truth is we both lied extensively on our dating profile. I did a photoshop job on a James Dean film poster. Caroline used a picture from when she was eighteeen and had a fringe. We were both busy at work and didn't take enough care on the accuracy of our biogs. We were both nursing wounds from a previous attempt to find harmony and were beginning to lose hope that we would find someone who was our equal. I suppose we elaborated.

Caroline has great red hair and has no need to wear a wig, but when we had got beyond coffee in Neros, a drink in All Bar One, and the latest Bond film at the Odeon Leicester Square, I asked her about the wig thing. She changed the subject. We probed each other politely and discovered we were incompatible. Even our lies were incompatible. I said we should sue the agency to get our money back and she was up for that.

We met for one last time at the wine bar to say goodbye. I told her I'd had a really good time and how much I'd enjoyed our dates, and what a shame it was we were incompatible. She nodded, and looked to the side.
'Do you really wear a wig?' she said.
'Not all the time,' I said. She thought some more.
'Do you fancy a shag,' she said, 'to see what it would have been like?'
We finished the bottle and went back to my rented mews flat near Lincoln's Inn. I showed her round, offered her a drink, but she cut straight to the chase:
'Can I wear your wig?' she said, only slightly embarrassed.
That night we discovered we fitted together very well. Caroline liked putting on a show, and I was an enthusiastic audience. A match made in wig heaven. 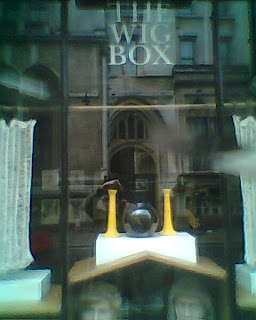