My agent wrote a novel

It's a bummer when your agent writes a novel. When Andrew Shephard told me he'd actually published Nellie and Tabs I knew I would have to read it. I was praying it would be terrible and I could say something patronising like 'Nice try, Andrew.' Unfortunately, crushingly, his book was better than any of mine. I asked him how he did it. 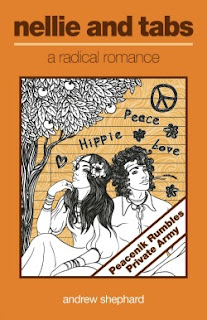 Your novel comes with such a powerful sense of the sights, sounds and smells of the 70’s alternative culture. Did you write this from your own experience or did you do a lot of research?

A lot of the details are dredged from my own experiences, and stories that I remember people telling me at the time. I didn’t do much research other than looking at old magazines and letters because I wanted to condense the main action into one year, and I didn’t want the facts to get in the way of a good story.

When you write a novel do you start with character or plot? Or was it the 70’s culture that inspired the story?

With this novel I started with the setting. The alternative society, as it was called at the time, is the type of enclosed world which makes good material for a novel. It takes the reader to a different world, though some aspects, especially youthful idealism, passions, and trying to find a role which suits, are familiar to most people.

Nellie covers a lot of ground in the book, moving from the commune in the north, to the Midlands to work on Peace Times, then London, Cambridge, Wales…. What made you choose these locations, and how important was Nellie’s travelling to the development of the story?

Well Nellie does not stick at anything for long so measures his life in months not years. Wherever he goes he does not quite fit in. He moves on to try and dig himself out of the latest hole he has dug. The locations I use are all places I have spent some time, so I sort of lived each scene as I was writing. I felt like I was really there, albeit as an observer.

The plot has many different strands as we follow the path of the different characters. It’s got everything – crime, politics, Nellie’s journey, and the ‘will they, won’t they’ romance of Nellie and Tabs themselves. Did you have all these strands fully planned out before you started writing?

No, I didn’t. The setting came first, then the main characters. As I wrote, the characters became sharper in my mind until they became almost as real as people I know today, and then I knew what they would do when they had difficult choices to make.

Nellie is a really interesting character, with some quirky aspects to him, such as his interest in magic tricks, and his nickname! How did you come up with him?

The magic tricks were important from the beginning because a trickster knows about illusion. He thinks other people – like Tabs with her I Ching and the peaceniks with their revolution – are performing an act too. He’s not a believer. The nickname came when I was imagining his life before leaving home, and a brother who changed Neil to Nellie as an insult. But Neil likes it, because of the song ‘Nellie the Elephant’ (a children’s song popular in the 1960s) and he fancies he has a better memory than his friends. Elephants reputedly have a good memory.

Your other main character, Tabs, is a real enigma – full of contradictions. Did you like her, in the end?

Tabs alights on new ideas, whether spiritual or political, and gobbles them up. She does the same to people, too. She is very much a free spirit, a 1970s style feminist who does not want to be tied down by a conventional relationship. So although she and Nellie feel a strong attraction to each other, there are issues which keep them apart. Did I like her? I admire her as a pioneer. She is more of a radical than Nellie is.

The ending of the novel, the last couple of chapters, are a real surprise, - it’s quite a bitter-sweet ending. Did you always plan to end the story in this way or did you change direction as your characters developed?

I neither wanted to repeat the traditional romance, nor completely lose the sweetness of a significant relationship. But I really did not know how it would end between Nellie and Tabs. Endings are always difficult, but at about the third attempt, as I was cycling back from a meeting with Emma Harding, my editor, it came to me like a revelation. So there was work to do even after I’d ‘finished’ the novel. Some people say ‘writing is re-writing’ and I experienced that to the full with this novel. But having written some bad novels, I think I can tell that, this time, I have written a better one.

Nellie and Tabs is available as a paperback and ebook from Amazon. Just click on the cover graphic.

A version of this interview first appeared on the Yorkshire Writers' Lunch blog.
Posted by Unknown at 01:22