Caroline has gone off her Kindle, saying that it's not trendy anymore. She still uses it surreptitiously for the kind of books I used to write, but much prefers a good paperback to fall back on when delayed at an airport or waiting to see the beautician for a massage. Returning exhausted last week from an emergency meeting at her company's new offices in Frankfurt, she tipped the contents of her bag out on to the kitchen table. She was looking for strong painkillers for her hangover, but seeing the handsome paperback, Shoreline among the pile of stuff she said, "You must read this, Robert. I want to talk to you about it. It's a crime thriller."

I read it, enjoyed it, and contacted the author - I wanted to be well briefed before discussing the book with Caroline. I didn't want her telling me I had got it all wrong. I was also hoping I might learn something of use for my own efforts in the fiction department. Mr Rigby was sympathetic to my situation, and provided the following answers to my questions, for which I am very grateful. 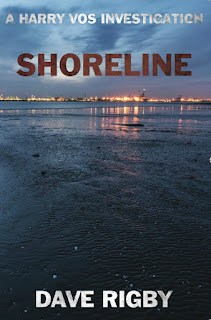 Harry Vos, your amateur detective is a rounded character with lots of life experience. How did you get to know him?
His name was my starting point. I saw it in a newspaper and thought it was a good mixture of a very English sounding first name and a Flemish / Dutch sounding surname. Because I’ve holidayed in the Flemish area of Belgium quite a bit, I decided to base him there. I thought it would be good to have a man in his sixties as the central character, retired (like me) and not a professional crime investigator. That way I don’t have to learn about police procedural stuff. I can just allow Harry to make it up as he goes along (as I do!). I had a strong idea of his character from the start (unlike the plot which unrolled as things developed). Basically I envisaged a solid man but with a number of strong character traits. He’s dogged, stubborn, gets annoyed quite quickly and can defend himself if he needs to. But he knows when he needs help from others - such as Katerine and Ryck.

Shoreline has a distinctive sense of place and gives the reader something of a tour of Flanders. How did you create such convincing locations for the action? And why Belgium?
Having holidayed over a number of years in Brussels, Brugge, Gent, Antwerp and Leuven, I picked up a bit of a feel for Flanders and felt reasonably confident about basing the book there. Harry lives in a small town called Heist-op-den-Burg. A few years ago I visited the town with a friend (when we were staying in Antwerp) to watch the local football team playing Aalst. I thought it was an appropriate location for Harry. I think his heart is still in Antwerp where he lived until his mid-teens. But then there were particular reasons why the family moved away from the city to a rural area. Heist fitted the bill for their new location.
Flanders is small enough to be able to move round quite quickly from city to city so it allows for rapid changes of scene. Having written the book in draft, I visited a number of specific locations including the beach, near De Haan, (where the body of Moise, the migrant, is found) and Zeebrugge where the character Rodenbach is based, to get a better feel for these places. I made some changes to the draft as a result of these visits.
I haven’t been to the Matonge area of Brussels, which features in the book, but I found some useful information via the internet on this part of the city.

The plot is contemporary and highly believable. How did you research the African end of the story?
When I started writing Shoreline, I didn’t know much about people smuggling – other than what I’d read in the papers. I did my research online for this aspect of the book, firstly to get a clearer idea of how smugglers operate and secondly to improve my knowledge of the Democratic Republic of Congo. I decided to focus on the DRC for this part of the story, because of the colonial link with Belgium and all its implications. I gathered quite a lot of information on geographical and historical aspects of the country, the languages and the mining. Then it was a question of what to use in the book in order to assist the story, without overloading the reader with too much detail.

Do you have a regular writing regime or do you write when the mood takes you? Do you always write in the same place, or can you write anywhere?
It’s a regular routine. I write between two and six in the afternoon – not the whole four hours, I hasten to add, but probably two to two and a half hours. I write four or five afternoons each week. I always sit at the dining room table and write straight onto the laptop, with breaks for cups of tea and newspaper reading. My typing is fairly slow but it’s about the same speed as my thinking! I sometimes work with music on – but only instrumentals, nothing with words as that’s too distracting. I very occasionally write in the morning but never in the evening. (I’d never get to sleep if I wrote in the evening.)

Harry Vos has a fondness for Belgian beer and strong coffee. Which is the greater help to your own creative process, beer or coffee?
I have a great fondness for both! But I don’t drink either when I’m writing. The reward for finishing the afternoon’s writing will be a beer (Belgian or otherwise) – but only when it’s a drinking day. I have a coffee or sometimes two every day, but this is always in a café. For some reason I never drink coffee at home. So basically it’s tea that keeps the writing going.

The story has a wide variety of characters, male and female. How do you come up with your characters’ names? Do you ever change a name as the character develops?
As I mentioned earlier – Harry’s name came from a newspaper article. The other names are the fruits of researching Flemish first names and surnames. I made a long list of possibles and then selected from that, trying to match the name to my idea of each character. I do sometimes change names part way through. (Thank goodness for the ‘find’ facility on the laptop.) The change is generally because I’ve come across a better name in my readings / viewings / travels.

Plot, character, setting, theme, and genre: which do you start with?
I usually start with a main character and a setting. With both Harry Vos in Shoreline and Ellis Landsman in Darkstone, I thought about their character traits and how they would react in specific situations. I knew what the setting for each book would be before I started writing. I always like reading books with a strong sense of place and try to create this in my writing.
For Shoreline, I knew it would start with the discovery of a body on the beach but I hadn’t planned what would happen after that! I decided fairly quickly to focus on people smuggling, partly because it’s such a high profile issue.
I don’t really think specifically about genre. But the murder mystery genre must appeal to me instinctively and it’s a good way of building a framework for the plot. Having said that, my third book, Disconnected, which I’ve just finished writing, is not a murder mystery.
I’ve left plot until last because I find it the most difficult. I learnt on my creative writing course that you should have a begin, middle and end clearly in mind before you start to write and that this helps to develop a plot outline.
As I don’t do this – I have to try and work out the plot as I go along and then go back and re-work it where necessary. I do quite a lot of walking and find these times very helpful for working out plots and solving plot difficulties.

Will we be able to read any more of Harry’s dangerous investigations? Any chance he might come to the UK?
I deliberately added the wording “A Harry Vos Investigation” to the front cover of Shoreline, because then I knew I’d have to write at least one more! I’ve got some ideas for book two in my head – but not quite a plot yet. As Harry’s daughter Kim lives in London, he may very well come to the UK, but the story won’t be set there.