And now, dear Blog Follower, for something a little different. Until now I have confined myself to writing about the adventures of my not-so-good-wife Caroline. God know, there has been plenty of material. But sometimes another story has to be told because it is simply the right time to tell it. Now is the time for the story called 'The Catch.' So I have put Caroline to one side, just for a while. She's away in Milan, anyway, attending the launch of the latest lingerie collection by the haute couture fashion house Plasticini, at the invitation of an old friend, the Ducati-riding Cosimo Baldisi.

Followers of the Ashes test series currently taking place in Australia will perhaps guess the topicality of this story arises from cricket, which is in many of our minds at present. For the English, the dropping of certain catches in the first two matches is a source of pain, and the losing of two tests by a wide margin a reason for wounded pride. For Australians, the victories are a sign that the almost empty trophy cupboard may soon be graced with a little wooden urn containing, it is said, The Ashes.

Thankfully, fiction is able to change everything, even the course of a test series. The great people at Steam eReads publishing decided, in the depths of the Australian winter, that it would be a service to readers of romance to spice up the Aussie summer with the release of a number of novellas, from short 'n sweet to short 'n spicy, written by their favourite authors, which capture the holiday mood. Beach reading, if you like. Or test match reading, if it's lunch, tea, drinks breaks, rain breaks, or just plain dull.

So I took the opportunity to contribute a story which has been brewing for some time, setting it over a Melbourne Ashes test match, starting on Boxing Day. I can't tell you the result, but I can tell you that England play better than they have done so far. In the crowd at the MCG are Alana Carragher and her two older brothers. Alana, a cricket nut, has a poster of the Australian captain on her bedroom wall.

Sitting in the row behind the Carraghers is an English post-grad student doing a year at Melbourne University. He's doing something with mice, but don't worry, it's not cruel. On the first day of the match, the Aussie captain hits a six (yes, he does, apologies to English readers) and Alana makes a diving crowd catch, a moment captured by the TV cameras and replayed on the big screen. It is a moment which brings her to the attention of The Captain, the object of her dreams and fantasies.

So very soon you will have the opportunity to read about a Melbourne test before it even happens. And you will also discover how Alana handles the dramatic events which unfold over the most important five days of her life so far. Don't worry it you don't like cricket. Everything is explained, and the romance will carry you though to the end. And if you do like cricket, you'll love it, just like in the song by 10cc. 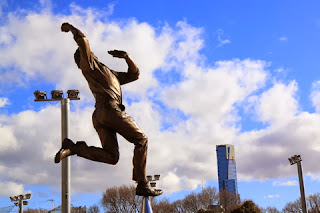