Friends of the Animus Vagismus

My name is Linda Bolsover and I work for CI5, the investigation branch of the Charity Commission. Not many people know we exist, but we were set up in response to concerns that some individuals and organisations were using charities as fronts for illegal activities and tax avoidance.

Robert has asked me to contribute a few words about my involvement in exposing Regina Heart's charity, Friends of the Animus Vagismus (charity number 43798). The full account appears in Robert's book, Shameless Exposure. Robert makes the work of a CI5 agent sound very exciting, but the reality is more mundane, and I spend much more time analysing computer files at a desk in London than in undercover fieldwork.

Just occasionally, though, I am grateful for the commando exercises which the operatives at CI5 undertake at the Parachute Regiment training camp. I certainly needed all my physical strength to escape from the prison pit at Castle Dunlaggin by scaling the rough walls and removing the heavy metal grill to access the castle courtyard. 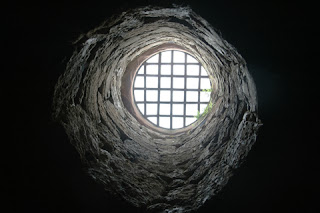 I had been thrown into the cell by Regina's female guards, who she referred to as Wimples, reflecting the tall conical headgear they wore to distinguish themselves from regular proselytes. The Wimples had caught me going through the drawers in Regina's desk whilst everyone else was occupied in connecting with their animal spirits at the winter solstice moon ceremony. It would be hard to explain the fervour of that ceremony to anyone who hasn't been there, but Robert does give some hint of the techniques the acolytes employed. I had to participate in the preparatory programme myself in order to remain undercover. Let's just say it was an education. Whilst not subscribing myself to Regina's philosophy, I do think the daily practice has led to better orgasms.

The Wimples didn't know that I had already broken Regina's password and found the files I was looking for. Once I had broken free from the cell I made my way back to the great hall where the ceremony was reaching, quite literally, its climax. I won't give away the end, but everyone knows that Regina is awaiting trial and could serve up to five years if found guilty. That night was one of the most satisfying of my life, both professionally and personally.

Robert took an enormous risk himself when agreeing to help me investigate Regina's cult. We all saw things we will never forget, and Robert nearly drowned when risking the boat journey back to the Isle of Mura in dark and windy conditions. It is in moments of extreme stress that lasting friendships are formed. Perhaps, after all, there is a special power in the animus vagismus.